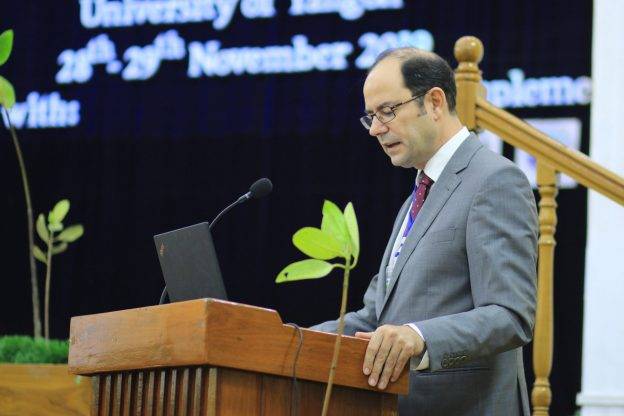 The opening ceremony of  “The First Symposium on Utilization of Myanmar Mangrove Ecosystems was held in Yangon University on Thursday 28 November 2019. In close cooperation with the Myanmar Sustainable Aquaculture Programme (MYSAP), funded by the EU and Germany, brought together key stakeholders from government, academia, private sector, civil society and local farmers in the first scientific symposium on the use of Myanmar’s mangrove ecosystems.

“This portion is a part of the larger program. The program that is funding 22 million euros. It is the scientific parts of the program to support for the collaboration of the University of Yangon to teach the students have for bachelor degree in factor of fisheries. So, this is a part of that work, but it much goes beyond in private sector with the Myanmar Fishery Association and helping farmers to increase their proactivity through sustainable practices. It is important to remind everybody that Myanmar fishery has a lot of potential through the sustainable project,” Deputy Head of Cooperation, European Union, Pedro Campo Llopis said.

Over 25 experts and scientists have handed in papers that were presented and discussed during this two-day symposium.In the symposium, academicians presented and discussed the status and management of Myanmar’s mangrove forests, one of the country’s most important coastal ecosystems and crucial for coastal protection and shrimp production. The symposium gave emphasis to a more holistic view on Myanmar’s ecosystem, not only focusing on environmental protection but including taking into consideration those who rely on the use of mangrove areas, especially shrimp (P. monodon) farmers, who mainly use traditional trap and hold systems. 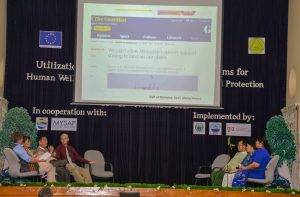 Professor, University of Yangon (Fisheries and Aquaculture), Dr. Kay Lwin Tun said “Mostly in fishery management, mangroves are protected and conserved by law but we have to look back for human wellbeing. So, we will protect the mangrove forests and we also use it for human wellbeing. It is not only for ecosystem but also the benefits of people. So, the symposium is the first to approach about the techniques how to increase biodiversity such as shrimp production and then the coastal protection by using mangrove ecosystems.”

There are currently around 12,000 trap and hold shrimp farm operators with 98,811 ha (244,169 acres) registered with Myanmar’s Department of Fisheries, mainly in Rakhine, Ayeyarwady and Yangon. However, most of the farms were damaged by the two cyclones Nargis and Giri in 2008 and 2010 and still are not functional as of today. Furthermore, farmers lack access to locally produced high-quality shrimp post-larvae for stocking of their ponds.

During the symposium, case studies on the status of mangroves forests in Kyauktan township (Yangon Region) was presented to show that existing shrimp farmers can take on the role of stewards and protectors of mangroves. In Kyauktan, mangrove forests only remain on “trap and hold” farms, as other former mangrove areas were cleared for rice paddy land. Based on an active exchange between the scientific community, civil society, the government, the private sector and especially the smallholder shrimp farmers this latter fact and its implications shall be made more aware among decision makers and other relevant stakeholders.

The remaining smallholder shrimp sector in Myanmar is at crossroads, facing various threats from different sides (i.e. public, private and government) which partly come from misunderstandings or lack of knowledge about best practices, e.g. mangrove friendly aquaculture. Further major threats are a ban of operations or even seizure and conversion of farms due to a lack of proper ownership documentation.

In view of this, the symposium brought together the key stakeholders for an active and open exchange on status, biodiversity and best practices of the sustainable utilisation of mangrove areas in Myanmar and the ASEAN region. It highlighted the lessons learnt from other Asian countries (e.g. The Philippines, Vietnam) in order to agree on a joint way forward for the sustainable protection and utilization of the valuable mangrove ecosystem and the wellbeing of the people.