In December 2019 MYSAP supported U Sai Sum Tip, Mikesili Koon Village, Kengtung Township, Eastern Shan State, to modify his rice field plot which already had a large peripheral water canal into an improved pilot rice-fish pilot, through the rental of a mechanical digger. The total field area was 0.6 hectares (1.5 acres) of which 0.31 (0.77 acres) was fish refuge area and 0.29 ha (0.73 acres) was rice field area with a configuration similar to the diagram below. 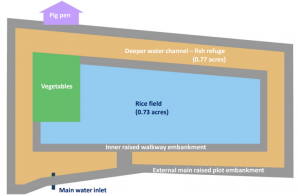 Common carp harvested from the pilot rice-fish plot in Kengtung

In the two rice production seasons, without using any pesticides the integrated rice-fish plot yielded 4,400 kg (110 bags @ 40 kg per bag) of rice paddy was harvested giving a total income of MMK 1,242,000 and a total cash profit from rice of MMK 974,000 after deduction of the MMK 268,000 total investment costs for rice production. 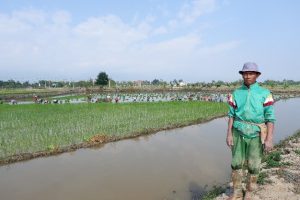 U Sai Sum Tip says that his total rice yield from the 2 crops (irrigated summer season and monsoon crops) was 32% up from the previous year without fish, by following MYSAP guidelines for the proper preparation and stocking GIFT tilapia and common carp fingerlings into the rice-fish plot. GIFT tilapia harvested from the pilot rice-fish plot in Kengtung

U Sai Sum Tip conducted a partial fish harvest in November 2020, but he was extremely pleased with the size of both the GIFT tilapia and the common carp which were an average of 271 g and 1,358 g each. To date U Sai Sum Tip has already recovered the investment in fish fingerlings and fish feed and has a cash profit of MMK 516,197 from the fish. Meanwhile he estimates that 50% of the fish stocked remain in the rice-fish plot ready for the final fish harvest later in 2021.