The Department of Fisheries under the Ministry of Agriculture, Livestock and Irrigation launched the 2019 – 2023 National Aquaculture Development Plan with the aim to give the Myanmar aquaculture Sector its first comprehensive planning document for sustainable development as well as improving livelihoods and combatting malnutrition in Myanmar’s large rural population. 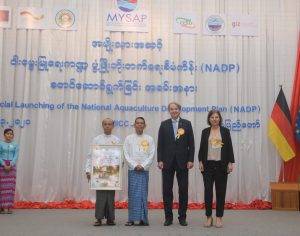 Aquaculture – the farming of fish, shrimp and crabs – provides livelihoods for up to 15 million people in Myanmar. The sector directly employs 3 million people and accounts for 30% of the country’s agriculture GDP. The new National Aquaculture Development Plan (NADP) of the Ministry of Agriculture, Livestock and Irrigation sets an ambitious agenda to strengthen the sector, increase its productivity while safeguarding the country’s environment and natural resources. 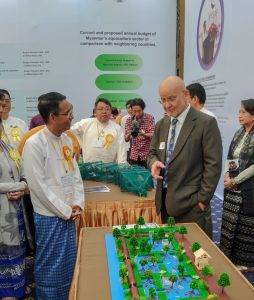 “We congratulate Myanmar on its new plan to develop its very promising aquaculture potential. We encourage the Government to now fully implement the plan, because it brings real benefits – more jobs, higher household incomes, better nutrition, good environmental management and growing revenues from export, including to the EU,“ said EU Ambassador Kristian Schmidt at the launch of the NADP in Nay Pyi Taw on 13 March 2020.

Mrs Marianna Knirsch, Development Counsellor of the German Embassy in Myanmar, highlighted the cross-sectoral efforts in drafting the NADP: “I am impressed by the programme’s effort to include stakeholders from all backgrounds in the development of the plan. During the state level consultations that were held to gather input for the NADP small-scale farmers got to voice their opinion for the first time. Also, actors such as farmers, universities, CSOs and local businessmen discussed the needs of the aquaculture sector together, which has never happened before.”

The NADP seeks an annual investment of at least USD 15 million, over the next five years from 2019 to 2023. In comparison, Myanmar’s neighbouring countries such as Bangladesh and Vietnam have already developed and are implementing national aquaculture development plans. However, aquaculture in Myanmar is not as far developed as in its neighbouring countries. Furthermore, the Myanmar government’s budget allocation to the Department of Fisheries is with USD 1 million for the 2019-2020 fiscal year lower than the budgets of neighbouring countries Bangladesh and Vietnam with annual budgets of USD 21 million between 2013 and 2020 and annually USD 20 million between 2011 and 2020 respectively.

Peter Buri, MYSAP’s Head of Programme, further explained the team effort in drafting the NADP “for years, the sector was in need of a comprehensive framework to scale up the livelihoods in rural population and national incomes. Thanks to a close cooperation with the Department of Fisheries, Myanmar Fisheries Federation, local farmers, universities and NGOs, we drafted the NADP together”.

Model regional plans for aquaculture development will be further developed in the regions such as Ayeyarwady Region and Shan State that are currently undergoing partnership with MYSAP in developing aquaculture initiatives.

The drafting of the NADP was supported by the Myanmar Sustainable Aquaculture Program (MYSAP), under the management of Department of Fisheries and GIZ and funded by European Union and the German Federal Ministry for Economic Cooperation and Development (BMZ). The local Myanmar think tank CESD provided survey research, multi-stakeholder consultations and technical assistance in developing and designing the plan.