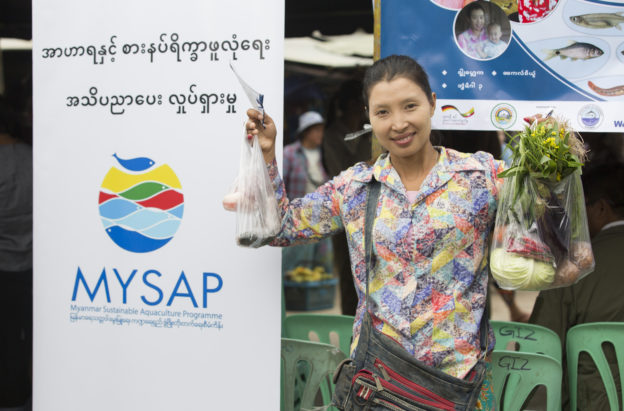 Under the slogan “Go Further With Fish” Myanmar Sustainable Aquaculture Programme (MYSAP) MYSAP hosted an event at Kengtong city market on 15th August 2018. MYSAP, funded by the European Union and Germany is closely working with the Department of Fisheries (DoF), within the Ministry of Agriculture, Livestock and Irrigation to support the sustainable development of the aquaculture sector. The Programme aims at realizing the potential of fish production for food security, nutrition and livelihood of the people. Improving the skills of small scale farmers on how to produce more fish of a better quality that can be sold on the market thus also contributing to creating jobs and income for people in the rural areas and also improving the access of families, especially children, to nutritional and healthy food. 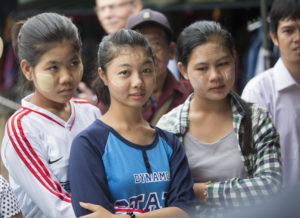 The Government of Myanmar had announced August 2018 as Nutrition Promotion Month and was encouraging to conduct nationwide activities and events to focus on raising the awareness for the importance of a healthy and well-balanced diet. “The purpose of the event on Kengtong city market was exactly this: It aimed at emphasizing on the nutritional benefits of fish consumption helping the visitors of Kengtong market to get an improved understanding of basic nutritional facts, to learn about the contribution of fish to a balanced diet and to learn how fish is well prepared for eating. Our team was supported by the GIZ-implemented project “Food and Nutrition Security in Shan State” as well as WorldFish, implementing MYSAP’s inland activities.” explained MYSAP Head of Programme Mr Peter Buri before the start of the event.

“This is a new stand. I have never seen it before. So, I was curious and came closer.” said Nan Poe Ei Khin, a regular shopper at Kengtong market. The MYSAP team had prepared various activities for the curious market shoppers approaching the new tent.With the first shoppers arriving in the morning the event started. In a game MYSAP sent out regular market shoppers to buy healthy food for 5,000 Myanmar Kyat. After coming back to the MYSAP stand Ms Heike Vögler, MYSAP’s Nutrition Adviser, then gave each of the bought items a ranking according to their nutritional value, meanwhile explaining about a healthy and well-balanced diet that should include fish. The shoppers that bought the most balanced food with the highest nutritional value won the competition.

All winners received goodies and could – of course – take the bought food back home. “It was such fun seeing what the shoppers had bought.” said Nan Poe Ei Khin. “I often buy many of these items myself but didn’t know much about their nutritional value. I always cook the traditional way”. In total 20 shoppers participated and ventured out to buy the healthiest food on the market.

Also, during the whole event two cooks prepared fish porridge and mashed sweet potato with pan fried fish. Heike Vögler explained about the benefits of these foods for complementary feeding. Kyaw Kyaw, a professional chef from a famous restaurant in Yangon, presented on how this can be done. “I love to go out and share my knowledge and enthusiasm with young people.” he commented and continued to fry a fish in the pan, explaining at the same time. “The food tastes so yummy!” exclaimed Nan Poe Ei Khin. “Next time I cook sweet potato I will try something new and add fish, just like the chefs.” 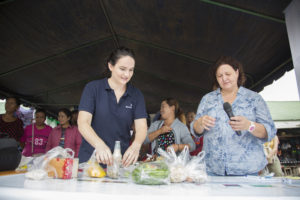 Local media attended the event, too, and conducted interviews with the market visitor and the MYSAP team. “Organising these events is always fun but a lot of work.” MYSAP’s Nutrition Adviser Theingi explained. “You always have to be prepared for unforeseen circumstances and react flexibly. For example, the local authorities placed our tent right at the junction of two market streets. Of course, this gave us a lot of exposure to market shoppers, but we had to reposition our tables and cooking equipment on last minute to make space for the shoppers wanting to pass by.”

In total over 150 visitors placed their name on MYSAP’s attendance lists and many more stopped to take a glance at this unusual event at Kengtong market. “I have never seen such an event here at the market.” said Nan Poe Ei Khin scratching her head. “I wish something like this would happen more often. I really enjoyed the cooking and the shopping and ranking of the items. Next time I will try to participate and only buy healthy food.” At the end of this day, we wanted to know if Nan Poe Ei Khin had learnt something from the activities. “A lot! I didn’t know that fish is so healthy and there is somuch to keep in mind if you want to have a well-balanced diet.”

“But now I have to hurry! My kids will come home from school soon and I still have to cook. I will try and buy a good fish on my way home.” Nan Poe Ei Khin said with a smirk on her face. With a wave she said good bye and went on with her shopping. The MYSAP team, too, had to hurry since there were many more interested shoppers asking questions.