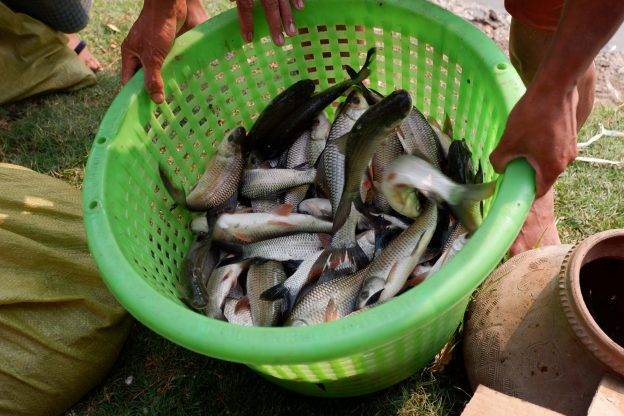 In recent years, much of Myanmar has experienced climate change impacts including rising temperatures and increasing prevalence of drought with associated water shortages. The Myanmar Sustainable Aquaculture Programme (MYSAP), which is funded by the European Union (EU) and the German Federal Ministry for Economic Cooperation and Development (BMZ) conducts field activities in Shwebo and Kale townships of the Sagaing Region and in Kengtung township of Eastern Shan State. In 2019 farmers in these regions reported that the monsoon season was both late and weak, with less rainfall than normal falling. 115 of the 426 (27%) households selected by MYSAP’s sub-grantee BRAC Myanmar in Shwebo Township were unable to stock fish seed because of insufficient water in their household ponds. For the 2019-20 fish and vegetable culture season MYSAP selected 24 demonstration farmers in Shwebo Township. MYSAP provides season-long training at appropriate times of the culture season delivered by BRAC Myanmar field staff on
i) integrated aquaculture, vegetable and fruit production on pond embankments and ii) improved human nutrition, including the benefits of eating fish and a diverse diet for pregnant and lactating women, and children in the first 1000 days. One MYSAP demonstration farmer was U Myo Myint Maung from Min Kone Village, who following MYSAP technical recommendations stocked his 0.25 acre (0.1 hectare) pond with 600 genetically improved farmed tilapia or GIFT tilapia, 100 silver barb, 100 small indigenous fish species or SIS, and 50 common carp funded by MYSAP. This was the first time U Myo Myint Maung had stocked GIFT tilapia promoted by MYSAP. 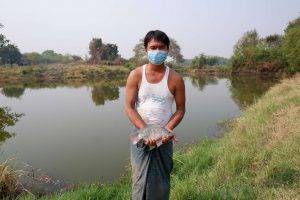 In addition MYSAP has trained, equipped and established one farmer per small-scale aquaculture group as a feed miller who produces and locally sells affordable high quality sinking pelleted fish feed with 20% protein. Using pelleted feed provided by MYSAP and placing the feed on a blue net feeding tray in the fish pond, the health and feeding behaviour of the fish was observed twice daily. The improved MYSAP technical recommendations, supply of improved quality faster growing fish seed and pelleted fish feed resulted in the household’s fish reaching market size in 6 months, instead of the normal 8 month period. While U Myo Myint Maung’s 0.25 acre (0.1 hectare) pond produced only slightly more fish in the 2019-20 culture season at 246.2 viss (401.3 kg) compared to 240.0 viss (391.1 kg) of fish in the 2018-19 culture season, the net profit of the household increased 92.1% from MMK 270,655 (€ 173.22) to MMK 519,825 (€ 332.69) in the 2019-20 culture season. By stocking fast growing GIFT tilapia which reach market size more quickly, small-scale ponds can still be profitable, despite reduced water availability and culture season duration. Additionally as the household’s favourite meal is fish curry, the family regularly partially harvested SIS every 3 or 4 days and put the SIS in their curry. 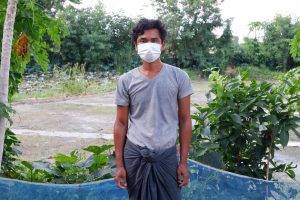 In the 2019-20 culture season MYSAP also supported the conversion of Ko Chit Moe’s 0.5 acre (0.2 hectare) rice field in Thee Kone Village near Shwebo into a pilot rice-fish plot with a deeper refuge ditch around the edge of the plot, but keeping the refuge ditch at a maximum of 5% of the total rice field area. MYSAP also supplied 500 Genetically Improved Farmed Tilapia (GIFT) and 500 common carp fish seed for stocking into the pilot rice-fish plot on 12 July 2019. Ko Chit Moe harvested his rice on 26 March 2020 and did a small 5.7 viss (9.3 kg) partial harvest of GIFT and common carp the same day. Ko Chit Moe reported that normally his income from his 0.5 acre (0.2 hectare) field from the rice alone would be about MMK 200,000 (€ 130), but this year he expects an income of at least MMK 350,000 (€ 225) from the rice-fish plot because the rice has grown better he said, as there were less insect pests and also because many more fish remained in the rice-fish system that the family would harvest later. Ko Chit Moe sells cooked food in their village and so the partial harvested fish from the rice-fish plot can be sold to provide additional value-added income. The pilot rice-fish technology supported by MYSAP is both environmentally friendly because no pesticides or chemicals were used, and requires less investment in input costs to grow rice. Ko Chit Moe has therefore decided to that he will continue sustainable rice-fish culture in the future.